With a population of 250 million, Indonesia is the fourth most populous country and second-largest plastic polluter in the world after China, and produces 3.2 million tons of unmanaged plastic waste a year. Out of them, about 1.29 million tons of plastic waste ends up in the sea. In addition, approximately 10 billion plastic carry bags equal to 85,000 tons are released the environment each year. This unmanaged plastic waste has also affected Indonesian rivers and the ocean. For example, four of Indonesia’s rivers – Brantas, Solo, Serayu and Progo – rank among the most polluted 20 rivers in the world. In this background, the government of Indonesia has recently adopted the Presidential Decree No.97/2017 on National Policy & Strategy on management of household waste and household-like waste (JAKSTRANAS) and the Presidential Decree No.83/2018 on Marine Debris Management (Plan of Action on Marine Plastic Debris 2017-2025). Aiming to support for the implementation of these national initiatives, CCET is providing technical assistance to the Ministry of Environment and Forestry (KLHK) in reinforcing and accelerating the reduction of land based plastic waste through the development of national strategy and action plans. CCET is also assisting local governments in the Lake Toba region, one of Indonesia’s 10 important tourism destinations where proper waste management is urgently required to protect the environment.

As a part of the drafting process of national action plan, a consultative workshop was organized jointly by KLHK, CCET and SWI (Sustainable Waste Indonesia) on 3rd October 2019 in Jakarta inviting representatives from different departments and sections of the KLHK, invited local governments and others. During the workshop, a draft national action plan was presented and active discussions were made to identify necessary revisions or improvement to the draft action plan. Some of the key comments that are raised by the participants are: (1) double-check the data, figure and tables to make them more accurate, (2) more emphasize will be given to the prevention of plastic generation at upper stream, (3) identify clear responsibilities and roles among national and local governments as well as civil society, private sector and academic/ science communities, and (4) in addition to regulatory measures, incentive measures need to motive both private and public sector to take innovative actions to reduce plastic waste generation and use. At the end, it was agreed to discuss review these comments between KLHK, CCET and SWI and elaborate them into the final version of the national plastic waste reduction action plan. 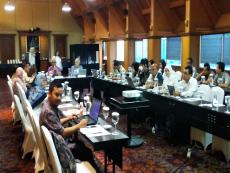 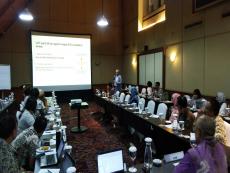