Consultative Workshop for the Development of Educational Material for Promoting 4R in Primary Education in Bhutan was co-organized by National Environment Commission (NEC) and CCET on 12 September 2019 at Hotel Osel, Thimphu, Bhutan. The workshop was organized as an initial step of a joint project between NEC and CCET to develop a supplementary tool for environmental education at primary schools in Bhutan.

The rapid economic development, population growth and lifestyle change in Bhutan are resulting in rise of municipal solid waste, with the per-capita waste generation increased within the last decade from 0.253 kg/capita/day in 2008 to 0.350 kg/capita/day in 2018. As a result of rapid urbanization, the amount of MSW disposed to Thimphu’s final disposal site at Memelakha has also increased to approximately 50MT/day with the population of more than 100,000, whereas the site was originally designed to accept only 8 to 10 MT/day serving then population of 15,000 at the time of construction in 1994[1].

In a country where environmental conservation is positioned as one of the four pillars under its development philosophy of Gross National Happiness, establishment of sustainable waste management system and promotion of 4Rs nation-wide are among the key areas of environmental governance in Bhutan.

In this context, the Royal Government of Bhutan, through its National Environment Commission (NEC) has been exerting efforts to address its waste management problems, including development of National Waste Management Strategy and Action Plan which aimed at providing policy framework for waste management at national level, and to align behaviors of different stakeholders based upon the common vision and goals shared among the society. Promotion of Environmental Education (E.E.) targeting young generation has also been positioned as one of the important strategies for promoting 4R (refuse, reduce, reuse and recycle) through raising awareness and enhancing collaboration and behavioral changes of individuals.

E.E. has been promoted as an independent elective subject at primary level in the present educational system in Bhutan targeting grade 9 – 12, while efforts through extra-curricular activities were also initiated to sensitize students, namely Youth Action for 4R. However, the call for introducing nation-wide programs and initiatives specifically targeted for waste reduction, management and monitoring in school context are increasingly visible[2].

In this context, following a request by NEC, the IGES Centre Collaborating with UNEP on Environmental Technologies (CCET) has initiated a joint project with NEC to develop an educational material for mainstreaming 4R through primary schools education in Bhutan, building upon the tools/experiences of CCET in this domain based on Active-Learning approach – an approach that values experiential learning in complementary to classroom lectures.

Accordingly, the first consultative workshop was organized with the aim of:

Presentations were delivered on the state of waste management in Bhutan, policy frameworks on waste management and environmental education (EE), current state of EE in Bhutan, and preceding EE efforts by key organizations. Several key suggestions were highlighted during open discussion including importance of 1) institutionalizing EE through potential integration into official curriculum, 2) approaching generation Y and above in complementarity to primary education, 3) collaboration with religious institutions as a strong influencer to people’s value system and daily behavior, 4) reference to upper stream concerns including SCP, 5) reference to emerging waste management issues such as waste-climate nexus and marine plastic pollutions, and 6) inclusion of provocative questions and focus on action-oriented learning rather than mere academism. 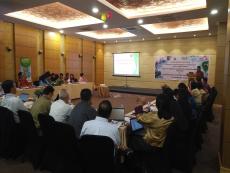 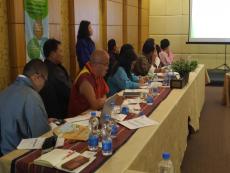 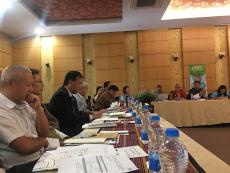