NMC and CCET would like to enhance the active involvement of the citizens in the preparation of city strategy, creating awareness on waste management issues in the city so that they can play a positive responsibilities at community level when the city strategy will be developed. As a part of this process, CCET has conducted a series of pocket meetings at ward levels during 19-23 February 2019 to get the citizen’s views on current waste management system, challenges and priorities issues in waste management.

During these local meetings, community members and city officials identified the importance of having Green Community Leaders, as volunteers to work with community members and make them aware about the new waste management systems, such as waste separation at source, practicing  household composting, cleaning community living environment including drainage, and discuss the community issues with public health inspectors (PHI) of the area for better solution. Responding to these needs, NMC elected Green Community Leaders covering whole city and awarded official letters of recognition at the public event that was organized on 20 September 2019. More than 100 community members participated the ceremony where Mr. Dayan Lanza, Mayor of Negombo city and Mr. Onogawa, Director of IGES-CCET distributed the letters to the newly appointed Green Community Leaders. Dr. Premakumara, Program Manager of IGES-CCET delivered a presentation on draft city waste management strategy of Negombo city with an aim to create awareness on new waste management strategy and action plan among the participants. NMC and CCET also discussed the importance of organizing training workshops for Green Leaders to build their capacity on handling effective coordinating role and functions between community members and city staff in improving the waste and sustainable resource management in the city. 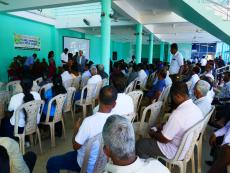 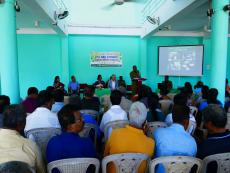