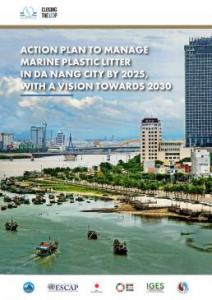 ACTION PLAN TO MANAGE MARINE PLASTIC LITTER IN DA NANG CITY BY 2025, WITH A VISION TOWARDS 2030

Implementing the Prime Minister’s Decision No. 1746/QĐ-TTg dated December 4th, 2019 on promulgating the National Action Plan on Marine Plastic Debris Management by 2030 and the Prime Minister’s Directive No. 33/CT-TTg dated August 20th, 2020 on strengthening the management, reuse, recycling, treatment and reduction of plastic waste (abbreviated as Directive No. 33), Da Nang People’s Committee issues the following action plan to manage marine plastic litter in Da Nang city by 2025, with a vision towards 2030, according to Plan No. 123/KH-UBND dated 24 June 2021 of Da Nang City People’s Committee.

This Action Plan has been prepared by Da Nang's Department of Natural Resources and Environment (DONRE), with a technical support from the United Nations Social Commission of Asia and the Pacific  (ESCAP), Institute  for Global Environmental Strategy (IGES), University of Leeds and International Union for Conservation of Nature (IUCN) under the project entitled: ‘Closing the Loop: Innovation and Scaling Up to Solve the Problem of Plastic Pollution in Marine Areas in ASEAN Cities’; and financially supported by the Government of Japan.

Action Plan in Vietnamese is here.