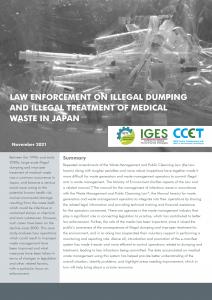 Between the 1990s and early 2000s, large-scale illegal dumping and improper treatment of medical waste was a common occurrence in Japan, and became a serious social issue owing to the potential human health risk and environmental damage resulting from the waste itself, which could be infectious or contained sharps or chemical and toxic substances. However, such cases have been on the decline since 2000. This case study analyses how operations which could result in improper waste management have been improved and what measures have been taken in terms of changes in legislation and other related factors, with a particular focus on enforcement.