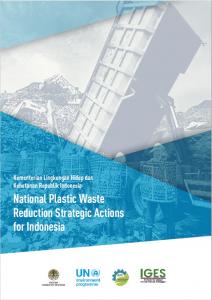 With a population of 250 million, Indonesia is the fourth most populous country and second-largest plastic polluter in the world after China. The country produces 3.2 million tonnes of unmanaged plastic waste a year, of which about 1.29 million tonnes ends up in the sea. In addition, approximately 10 billion plastic carry bags, equal to 85,000 tonnes, are released into its local environment each year. This unmanaged plastic waste has also affected Indonesian rivers and the ocean.

Aiming to create an enabling environment for the implementation of these Presidential Decrees, the National Plastic Waste Reduction Strategic Actions for Indonesia was formulated by the Ministry of Environment and Forestry (MoEF), the Government of Indonesia, and the IGES Centre Collaborating with UNEP on Environmental Technologies (CCET), in
collaboration with Sustainable Waste Indonesia (SWI). It provides holistic and practical actions to accelerate the reduction of plastic pollution from land-based sources.