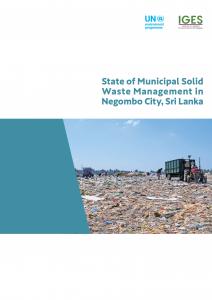 Negombo City is one of the fastest growing tourist destinations in Sri Lanka. It is the major commercial and transport centre, and main health service provider for the region. However, municipal solid waste management is a pressing concern for Negombo due to expanding urbanization, increasing income, lack of public awareness, changes in consumption patterns, and inadequate waste management such as insufficient proper waste collection and coverage, shortage of transporting vehicles and laborers, insufficient land for waste treatment facilities and landfill, lack of proper training given to technical staff with regard to maintaining information, records and statistics for planning and monitoring of the waste management activities, illegal burning or disposal of waste, as well as improper maintenance of existing waste management system or facilities.

In response to a request for support from the Ministry of Mahaweli Development and Environment (MoMDE) as well as strong interest from Negombo City, IGES Centre Collaborating with UN Environment on Environmental Technologies (CCET) has been providing technical assistance towards the development of a waste management strategy for Negombo since March 2018. Concurrently, a quick study was conducted on Negombo’s existing waste management systems and current practices including the waste flow, policies and regulations framework, in order to identify the gaps on waste management in the city. Negombo City still manages waste in the conventional way by collecting waste from the source and dumping it in a final disposal site with very little recovery or treatment. The only recycling facility in the city is located in Muhandirampitiya where recyclables such as cardboard,paper, polythene, plastic, glass, coconut shells and metal are separated from the non-degradable waste brought to the centre. It is observed that non-degradable waste collected at the centre consist of low-grade recyclables amounting to minimal recovery of recyclables of about 2.37±3.9 MT/month. The city also has a compost facility in Kurana with a capacity of 10 MT/day; however, the intake is limited to 6-8 MT/day as there have been public complaints and objections about the potential nuisance caused by flies and odor whenever Negombo Municipal Council (NMC) tries to increase the intake. Negombo experiences a bottleneck with regard to managing industrial waste due to the fact that small and medium-sized industries dispose of their industrial waste using the general MSW collection service carried out by Local Authorities. This is despite of the legal arrangement which states that industrial waste must not be disposed of into the general waste stream. Industrial waste generated in Negombo City is estimated to come to 6.33 MT/day. It is mandatory for all healthcare facilities to secure storage, transportation and disposal of all high-risk healthcare waste whereby generally all government and private sector healthcare facilities receive a service from the private sector to dispose of all high-risk healthcare waste. The total amount of waste generated from healthcare facilities is estimated to be 3.84 T/day out of which nearly half a tonne of waste is considered high risk waste that needs to be disposed of through private sector service providers. Hazardous waste generated from major industries is properly managed by those industries, but those from small waste generators such as households, commercial establishments and other services and institutes are not well regulated, and waste generally gets discharged into the MSW collection system in the form of non-degradable waste. It is estimated that NMC collects about 200 kg of hazardous waste per day, largely as mix components in general MSW. Construction and Demolition (C&D) waste is managed by those that generate it. Usually, the metals, wood, plastic and stone that can be found in the C&D waste are recycled, but non-recyclables are generally used as land reclamation material as an alternative to soil. Toilets in households, public places and all other establishments are built with sufficiently large soakage pits and when the soakage pits gets filled, NMC provides sewage collection service ― this is a paid service. The collected sewage is treated in a sewage treatment plant adjunct to the compost facility. Wastewater from other sources is generally managed by generators.